The millennial generation (currently age 14-33), also known as generation Y or the echo boomers, has become the subject of a lot of media attention and broad generalizations. So, for our Minnesota Compass Annual Meeting we dug into the data and pulled out some trends related specifically to this age group in Minnesota. We found some interesting surprises we share with you here.

2. 1 in 4 millennials in Minnesota is a person of color 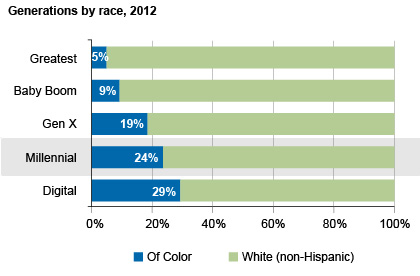 With nearly 40 percent of Minnesotans age 25-34 having earned a bachelor’s degree or higher, we rank 7th nationally in educational attainment. 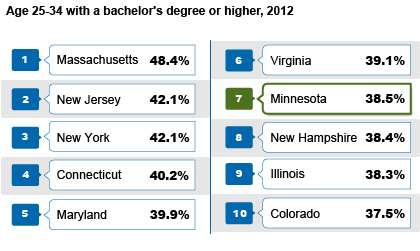 For the Twin Cities region, we rank 5th compared with the nation’s 25 largest metropolitan areas. These national comparisons are among the older half of the millennial generation, who have made their way through most of their formal education.

4. The Great Recession was hard on millennials

Poverty rates are markedly higher for millennials today than was the case for young baby boomers back in 1980 and generation Xers in 2000.

Additionally, once you control for inflation, the income of millennials age 16-24 in 2012 is over 20 percent lower than the income of baby boomers in that age group in 1980. Note that this income loss is NOT a broader trend; overall household income is up by 18 percent in Minnesota since 1980, including a 25 percent increase among those age 55-64 today (boomers). 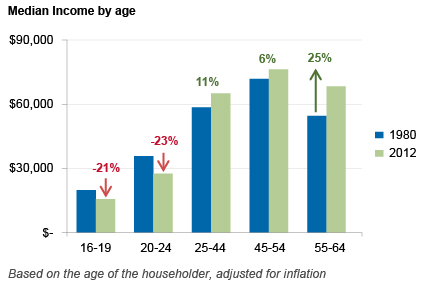 It is important to note though, that the overall employment rate for Minnesotans age 16-34 has not changed substantially from 1980 although today’s job market is much more inviting for young women (especially those age 25-34) than was the case for the boomers in 1980. But young men today are slightly less likely to be employed than were young boomers and gen Xers, and we see this drop especially among entry-level young men age 16-24.

5. Millennials are not immune from racial gaps, but some progress is being seen

Despite the good marks overall on educational attainment, Minnesota’s millennials aren’t immune from the racial gap that plagues Minnesotans of all ages across employment, home ownership, and even disability rates. Among those age 25-34, for example, while non-Hispanic white Minnesotans are more likely to have at least a bachelor’s degree than are their national counterparts, young adults who are Asian, Black, and American Indian in Minnesota are less likely to have a degree than is the case for the U.S. as a whole. 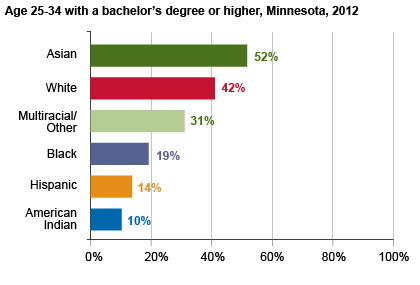 There is some good news in terms of gaps, however. The high school graduation rate among students of color has increased by 19 percentage points, from 43 percent in 2003 to 62 percent in 2013, and the white-of color gap has narrowed from 36 percentage points to 23 points. There is still room a lot of for improvement, but this is a definite move in the right direction. 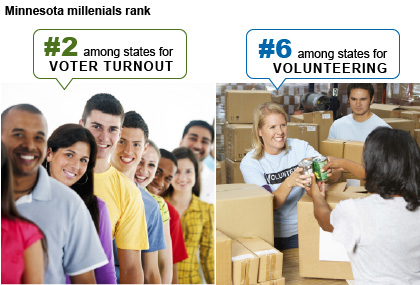 Combined with the relatively good news in education, Minnesota’s millennials appear poised to maintain Minnesota’s generally high quality of life – and might even be the generation to figure out how to more effectively open opportunities to extend that relative prosperity for an even broader array of communities here in Minnesota.