As we approach year’s end, I have been taking stock of some of the most important trends facing our state, reflecting on the “key measures” we have developed with input from hundreds of advisors who have helped us shape Minnesota Compass. As I did so, five good news/bad news stories emerged from my own look at the data. Here is my list. If you have a list of your own, let me know. I would love to hear what others consider the top trends facing our state.

1. Economy: Jobs have recovered, but the benefits have yet to reach everyone

Minnesota’s recovery from the Great Recession continued in 2014. The number of jobs on the payrolls of our state’s employers is now over 2.8 million — about 100,000 more than the pre-recession peak in 2007! 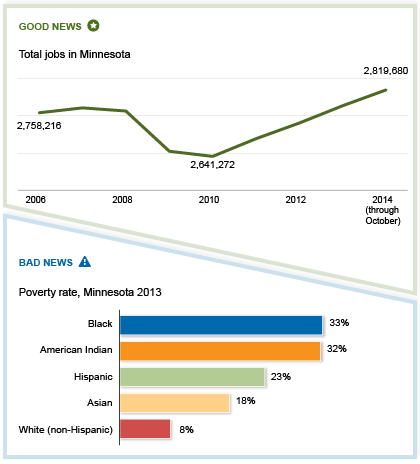 Despite the broader economic recovery, the latest data show that poverty remains near the 20 year high. One in ten Minnesotans live in poverty, with the highest rates among children and people of color.

2. Education: Graduation rates are up, especially among students of color, but racial gaps remain daunting

Some Minnesotans think the state’s educational system is broken, and even more of us assume that educational disparities are worse now than ever before. A look at the state’s graduation rates, however, tells a different story. 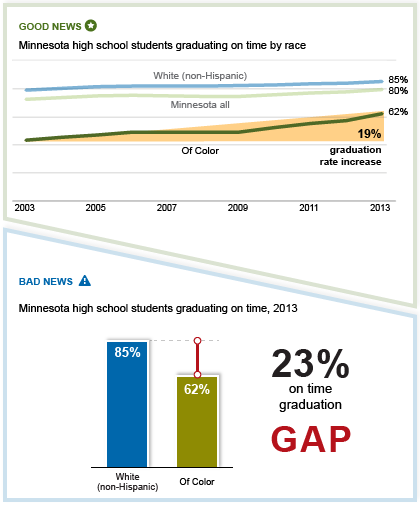 The flip side of this good news story is that the racial gap is still wide, and closing it won’t necessarily get any easier. Looking back along the educational pipeline we still see big racial gaps: 26 percentage points in proportion of 8th graders meeting grade-level math standards and 29 percentage points in proportion of 3rd graders meeting grade-level reading standards. In Minneapolis and St. Paul we see even bigger gaps in measures of kindergarten readiness.

3. Health: High standings overall, but further improvement is hard to come by

As a group, Minnesotans are healthy! A look at our Compass key measures shows we have the 4th lowest diabetes rate and 10th lowest obesity rate in the nation. We also rank high for insurance coverage. While those rankings might overstate things a bit (we are actually statistically tied with several states ranked below us), our state generally enjoys a healthy quality of life. 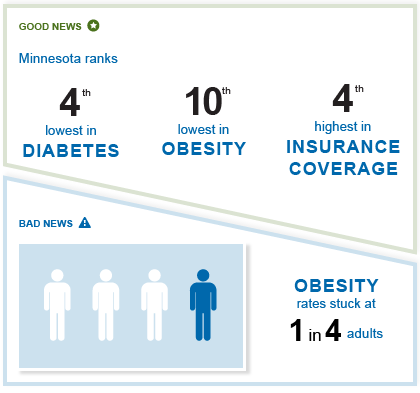 The bad news here is that Minnesota’s diabetes trend continues its very slow upward climb, and our obesity rates appear stubbornly stuck at 25 percent of our adult population.

Given all of the attention to improving healthy eating and increasing exercise, the obesity rate is particularly frustrating. A couple years ago we were rejoicing in the fact that obesity rates had stopped rising; now it is time for us to re-double efforts and actually lower the rate of this largely preventable condition.

4. Housing: Burdens on homeowners are easing, but homelessness persists

One data point does not a trend make. That is why I was relieved when the latest American Community Survey data showed a second consecutive year of decline in the prevalence of cost burdens among Minnesota homeowners. A trend! And a positive one!

This is particularly good news in light of recent history: Between 2000 and 2007 the proportion of Minnesota’s homeowners that were cost-burdened – spending at least 30 percent of their income on housing – nearly doubled, rising from 17 percent to 29 percent. This mirrored an even steeper increase in foreclosures, the tanking of the economy, and a drop in employment – all of which kept over a quarter of Minnesota’s homeowners struggling with cost burdens for five straight years. While there is still room for improvement, the trend is now heading in the right direction. 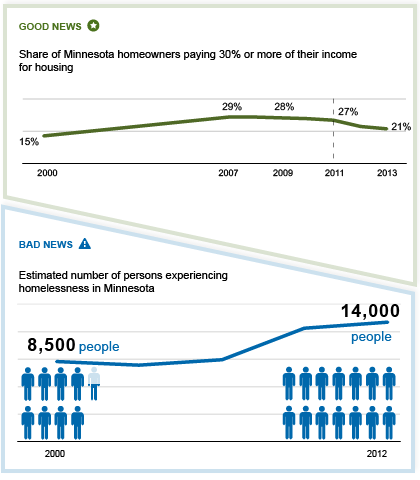 On the very lowest rung of the housing ladder, however, things continue to look rather bleak. The most recent statewide study of homelessness from Wilder Research counted more than 10,000 homeless people, and estimates that more than 14,000 Minnesotans are homeless on a given night, a rate which increased dramatically from just six years earlier. Anecdotal information tracked by Minnesota Housing Partnership suggests that the number of people experiencing homelessness has only increased since that time.

I can’t resist ending on my go-to indicator of good news. Minnesota continues to be among the nation’s leaders in volunteerism. In fact, the Corporation for National and Community Service places the value of Minnesota’s collective volunteering efforts at $3.9 billion! As we observed in previous Insight articles on millennials and on our aging population, volunteerism is embraced by Minnesotans of all generations: Minnesota’s millennials out-volunteer their counterparts in all but four other states, and if our back of the envelope projections hold, the volunteer hours of Minnesota’s baby boomers will sum to a collective annual asset with an annual value of nearly $900 million by the year 2040. 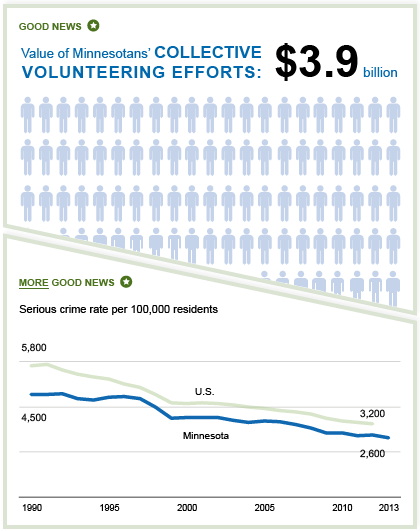 In sum, a lot of good news emerged from our tracking of 36 key measures in 13 areas in 2014. Even the bad news stories that we have highlighted above are not all bad; in many ways they are nothing more than challenges to be embraced, problems to help solve, and opportunities to further improve quality of life in our state. We look forward to measuring progress and inspiring action with all of you in 2015.

Craig Helmstetter is the former director of the Compass project.