Instilling the value of civic engagement in youth

Though Minnesota has some of the highest rates of civic engagement nationally, young adults age 20-24 are the least civically engaged. About 1 in 4 report volunteering in the last year, compared with about 40 percent of middle-aged adults. Far fewer young adults voted in the most recent national election than adults age 45 and older.

How can we promote civic engagement in young adults? A recent long-term study I conducted of Wilder Foundation's Youth Leadership Initiative (YLI) found that by building youth’s confidence and skills, they are more civically engaged as they move into young adulthood.

First, a little about the initiative 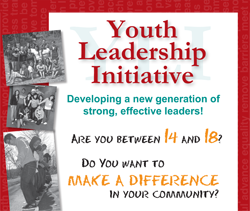 Now in its 10th year, the YLI program is an intensive, year-long leadership program for young people age 14-18. Throughout the program year, youth are actively involved in community action teams to address a community issue that they themselves identify, research, and develop strategies to address. They take turns practicing meeting facilitation, talking to key stakeholders, and presenting to each other, skills they can take with them into adulthood.

Here’s what we learned

In a recent web survey of alumni who have participated since the program’s inception, former participants (now young adults) report positive outcomes in two key areas. 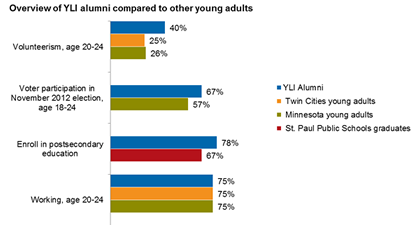 What makes the initiative effective

While there are a myriad of possible reasons, one result of the long-term study is that youth embrace the program. The intensive, year-long program is quite a commitment for teenagers, but an important part of gaining the skills, knowledge and experience to be a leader in their community. On average, youth engage in the program twice a week, and a quarter go on to participate for multiple years in leadership roles, serving on the program’s youth leadership team.

As it starts its 10th year, I’m thrilled to be able to continue working with the staff and youth to determine what additional impacts we may uncover.