It's been a decade since the Great Recession ended. How has Minnesota recovered?

Jacob generates and curates content for the Minnesota Compass website and manages a portfolio of related research projects. He seeks to improve community vitality by promoting the use of data and community indicators to better understand trends in different quality-of-life measures. 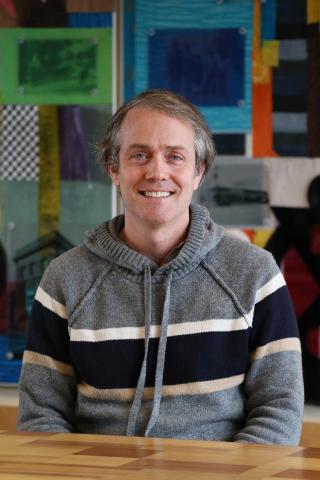 Officially, the Great Recession ended in June 2009. In technical terms, that means the economy began growing again the next month, in July, even if that growth was relatively small.

Unofficially, the recession continued to drag down households for many months—if not years—after its official end. Income, jobs, housing—the slow economic pace of the recession's aftermath touched many aspects of life. This was true for the country, and it was most certainly true here in Minnesota.

In the decade since the official end of the Great Recession, how has our state fared economically? Below, we take a look at some data to answer this question and to examine how pocketbook-related racial disparities have changed over the past decade.

At a macro level, our state is faring relatively well on a range of economic and financial measures: the economy continues to grow; income is rising; jobs are plentiful; and labor force participation is increasing.

Gross Domestic Product (GDP), a measure of our state's economic output, reached nearly $306 billion in 2017, up nearly $50 billion since 2009. Median household income has been steadily creeping up, hitting $68,400 in 2017. The number of jobs available has increased to 2.9 million, roughly a quarter-million more than in 2009. And the proportion of adults working now stands at 79 percent, up from 75 percent in 2009.

Furthermore, the share of households paying too much for housing has declined. Across the state, 26 percent of households in 2017 paid more than a third of their income in monthly housing costs, down from 34 percent in 2009. That's the good news. 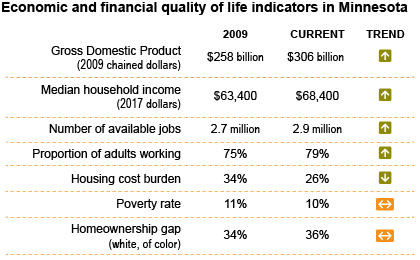 The bad news is we've also seen things stay the same, or worsen, on a couple of measures of economic well-being. Minnesota's poverty rate remains stubbornly high, measuring 10 percent in 2017. And rates of homeownership are trending downward.

Unfortunately, the story gets uglier.

At a more micro level, our state isn't performing well on range of measures, especially when we disaggregate data by race. 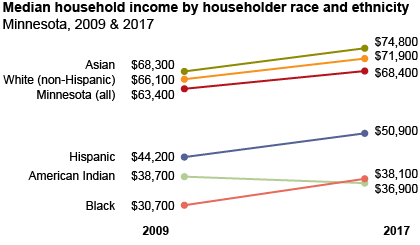 Poverty is another measure that reveals substantial disparities across Minnesota's racial and ethnic groups. While rates have declined for all racial groups over the past decade, only white Minnesotans have a poverty rate below the state average. All other racial and ethnic groups have higher rates. American Indian and Black residents have the highest levels of poverty, at 29 percent and 28 percent, respectively. And the poverty rate of Minnesota's Hispanic population, though considerably lower than American Indian and Black populations, is still nearly double the state average. 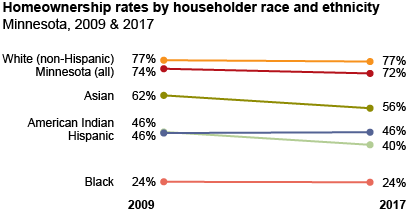 Finally, across the state, housing costs are burdensome for a considerably larger percentage of households of color than for white Minnesotans. Despite falling 9 percentage points since the end of the recession, to 40 percent in 2017, the share of households of color that are housing cost burdened is considerably larger than white households, 23 percent of whom pay more than 30 percent of their income for housing.

Without parity, can we say we've made progress?

We could cheer the gains and positive movement in the economy that Minnesota overall has enjoyed since the end of the Great Recession. After all, at a high level, our state has fared relatively well on a few economic measures—GDP, job growth, and labor participation, for example. But would our note of self-congratulations gloss over an uglier truth?

Because other pocketbook indicators tell us a different story. When we examine more closely data related to median household income, poverty, homeownership, and housing costs, we see that the far worse starting positions for Minnesota's populations of color lay stark the disparities that persist in our state.

Such large disparities by race remain a steady and prevailing trend in Minnesota—a trend predating the Great Recession—and until those gaps narrow considerably, it's inaccurate to conclude that the progress our state has made has delivered for everyone.

Minnesota had more than 142,000 job vacancies during the second quarter of 2018. We need to fill these openings with our pool of talent, including those people currently seeking employment and those who, for a multitude of reasons, are not. Together with our next generation of workers, our state can nurture an economy that moves toward racial income and employment parity.

Below is an abbreviated list of organizations and programs working to advance this goal. To learn more about economic and financial disparities in Minnesota and to peruse data related to this topic, visit:

For those who want to learn about and get involved with organizations seeking to address economic and financial disparity, visit: