Recently released Census Bureau estimates show Minnesota’s median age rising from 35.4 in 2000 to 37.7 in 2013. That might not seem dramatic, but the data also confirm a striking trend we have watched for years: Minnesota's aging population is like a jet airplane that has just lifted off. 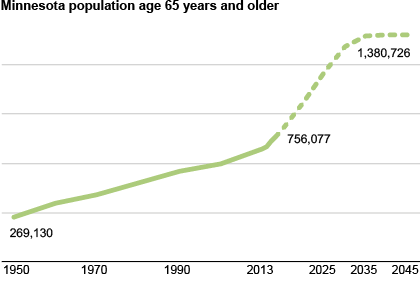 1. Different rates of aging can help counties learn from each other

By 2030, more than 1 in 5 residents in all Minnesota counties will be age 65+. But, if we think of Minnesota’s counties as a fleet of 87 airplanes, it is safe to say that they are not all taking off at the same time! 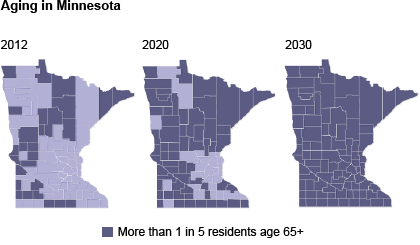 1. Different rates of aging can help counties learn from each other

By 2030, more than 1 in 5 residents in all Minnesota counties will be age 65+. But, if we think of Minnesota’s counties as a fleet of 87 airplanes, it is safe to say that they are not all taking off at the same time!

From 1960 to 2010 the ratio of retirement-aged Minnesotans to those in their prime working years remained at about 1 to 5. With the aging of the Baby Boom, that ratio is rapidly changing. By the time we reach cruising altitude in 2030 we’ll have only 2.5 working-aged adults, likely with only 2 actually employed in the paid workforce, for every retirement-age Minnesotan. Keep your seatbelts fastened!

There has been a lot of important discussion recently about a growing gap between the rich and the poor, as well as concern that many nearing traditional retirement age will not have enough savings. Living Longer on Less: The New Economic (in)Security of Seniors, reports that 78 percent of all senior households are financially vulnerable. A fact sheet from AARP says Social Security is the only source of income for almost three in ten Minnesotans age 65+. What do the economic measures we track on Minnesota Compass have to say about how these macro-economic trends are impacting older adults here in Minnesota? 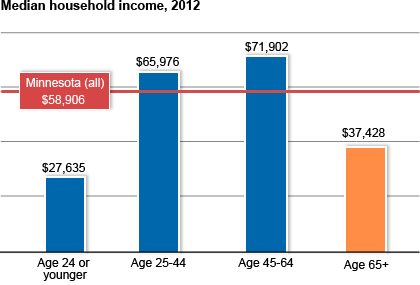 While median income levels for older households have not changed much over the past dozen years, at $37,400 they are well below the overall median income of nearly $59,000. At the same time, housing costs have risen, and more than one-third of older adults are housing cost-burdened.

One solution may be to create more opportunities for people to work longer. In a recent article in the Pioneer Press, former state economist Tom Stinson says we need to take advantage of mature workers, who are still very productive, and suggests keeping them employed part time in low-stress jobs. A look at our workforce by age shows this is already happening -- one-quarter of adults age 65-74 are currently working.

4. A changing demand for services

Disabilities become more common with age. In 2012, 32 percent of all Minnesotans age 65+ had some sort of disability; equivalent to about 222,000 individuals. That number had increased by nearly 12 percent, almost 24,000 people, in just five years. 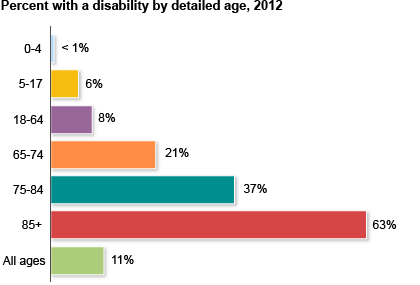 If even one-quarter of that group needs care, that portends a lot of pressure on a health care system that is already stretched in many parts of the state, not to mention the pressure on insurance programs and tax payer dollars. Spouses and others who serve as caregivers also require support, resources, and respite from providing care to maintain their own health. According to the Census Bureau, about one-third of older adults in Minnesota live alone, and may lack built-in support and social interaction necessary for continued well-being.

A sort of silver lining to all of this talk of disabilities: When you compare Minnesotans age 65 or older to their counter-parts in other states, we have the 4th lowest disability rate in the nation. So, while the looming increase in older adults with disabilities is definitely an issue, let’s not lose sight of the fact that in Minnesota, even more so than other states, many are living longer, healthier, and more vibrant lives. 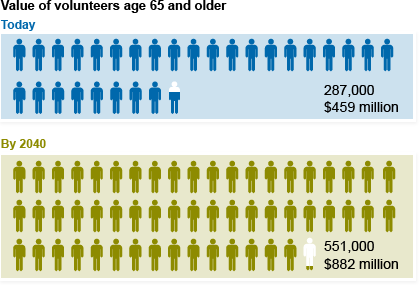 In fact, today there are nearly 287,000 volunteers age 65+ in Minnesota. Assuming on average, each person volunteers 80 hours each year, at an average rate of $20/per hour of labor, that equates to $459 million of donated labor. By 2040, that number is expected to climb to 551,000 volunteers, equating to a stunning $882 million asset for our state!

Craig Helmstetter is the former director of the Compass Project.