In conversations with residents across the state, we learned that accessing affordable and adequate broadband remains a challenge for some businesses and households in communities throughout greater Minnesota.
To better understand these challenges, we surveyed the broadband landscape in Minnesota and sought to answer three questions: Who owns a device? Who has an internet subscription? And what quality high-speed service is available to them?

1. What share of Minnesotans do not own a device that connects to the internet?

More greater Minnesota households than you might think do not have a desktop, laptop, tablet, mobile device, or smartphone. About one in seven households in Minnesota’s northern, northwest, southwest, and west central regions do not own a device that can connect to the internet. At nearly one in four households, Mahnomen County has the highest share of households without a computer by county. 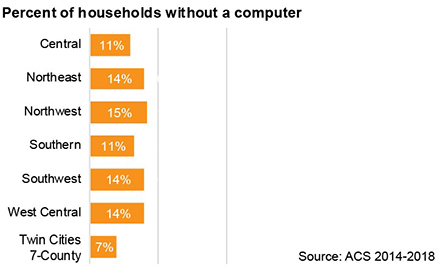 A small percentage of residents without computers in their homes—around 1-5% of households in regions across the state—report accessing the internet in other locations such as libraries or community centers.

2. What share of Minnesotans do not have internet in their home?

In greater Minnesota, nearly a quarter of households do not have any type of internet in their home.

By region across the state, the northwest region has the highest share of households—more than a third—without internet, followed by the northeast, southwest, and west central regions, where a quarter of households do not have internet. By comparison, 13% of households in the 7-county Twin Cities region lack an internet subscription or computer in their home.

The share of households with a computer, but without an internet subscription, is highest in the northwest, northeast, southwest, and west central regions of the state. 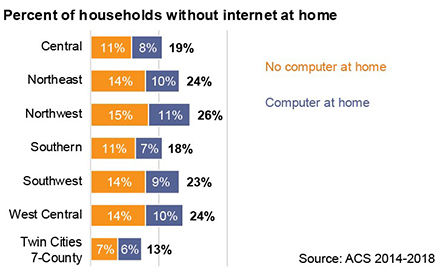 There are many reasons that households in greater Minnesota may own a computer but not have an internet subscription, including cost, lack of adequate speed, or lack of interest, need, or know-how.

3. How fast is the internet that Minnesotans can access?

The state of Minnesota is working hard to provide adequate broadband speeds across the state,—but, until their goals are reached, gaps remain.

The most recent Rural Pulse survey, funded by the Blandin Foundation, found that improving access to high internet speeds is one of the top four issues among business owners in greater Minnesota. And the people we spoke to are right to be concerned: access to sufficient broadband speeds in rural communities is associated with higher incomes, lower unemployment, and new business growth. Another recent Blandin Foundation analysis demonstrates the economic value of adequate broadband speeds in five rural Minnesota communities. 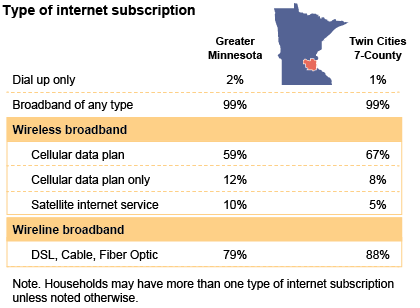 For those who are able to afford internet subscriptions, adequate broadband speeds remain an issue in some pockets of the state. In Minnesota, investments are being made to make sure that the entire state has access to sufficient broadband speeds.

Data collected by Minnesota’s Department of Employment and Economic Development reveal that pockets across greater Minnesota are still working toward ensuring that all households have access to 25 Mbps download and 3Mbps upload broadband speeds.

In about half of all Minnesota counties, at least 85% of households, should they choose to pay for an internet subscription, have access to these broadband speeds. At least 96% of households have access to 25 Mbps/3Mbps broadband speeds in all seven counties in the Twin Cities metro and 11 western Minnesota counties. Households with less access to these speeds are not concentrated, but rather are scattered throughout the southwest, northwest, and central regions of the state.

To find the broadband speed for your county, go to our MN Compass Geographic Profiles and select your county. Recently released data will be updated in the coming months.

The Office of Broadband Development at the Minnesota Department of Employment and Economic Development has a range of resource on broadband activities throughout the state, including more maps and data, goals, planning resources, information on digital inclusion, and a grant program.

The Blandin on Broadband blog shares information that supports and promotes broadband access and use, especially in rural Minnesota.

American Community Survey 2013-2017 five-year estimates are based on data collected over five years, and describe characteristics for that five-year time period. The margins of error for the data described in this article are (+/-) 1-3%.