Getting out the vote, part 3: Minnesota's non-voters

Megan is an IT Analyst working on the Minnesota Compass and Sprockets Database projects. For Compass, she pulls and analyzes national and state data to provide a picture of quality of life in Minnesota’s communities. 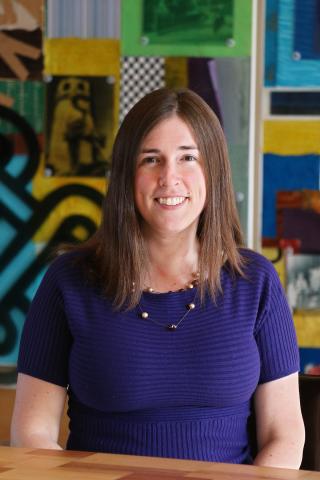 In the previous two articles of this series, we looked at Minnesota’s overall voter turnout and the rise in absentee voting during the COVID-19 pandemic. For our final segment, we want to take a look at who in Minnesota has traditionally been missing at the polls – the non-voters. There are two major points at which a potential voter can be “lost”: when eligible voters do not register to vote, and when registered voters choose not to cast a ballot.

As of the August 2020 state primary, about 85% of eligible voters in Minnesota were registered to vote. That figure exceeds the 81% who were registered before the day of the general election in 2018 (although an additional 6% registered on Election Day), and is higher than in most other states.

…but they reveal some disparities

According to the Census Bureau’s Current Population Survey, registered voters tend to be disproportionately older, whiter, and more educated than those who are not registered. 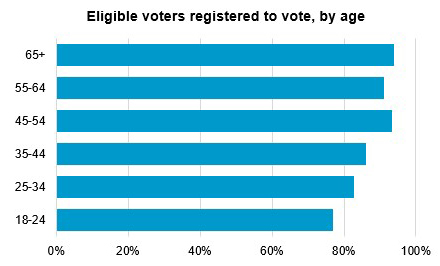 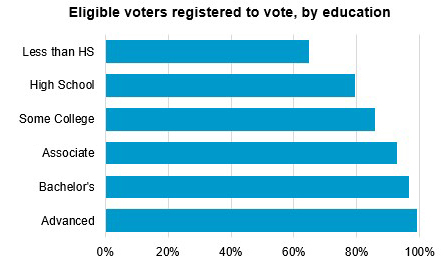 Among registered voters, there are disparities in who turns out to vote

Even among registered voters, not everyone turns out to the polls. In the 2016 election, 82% of Minnesotans who were registered to vote actually cast a ballot. Demographic disparities are visible here, too. In 2016, people with a disability were less likely to vote, as were people with lower incomes and educational attainment. 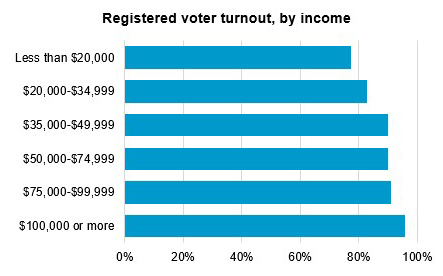 Age actually is not a meaningful predictor in this case. At least in 2016, young voters were less likely to be registered, but those who were registered turned out at about the same rate as older voters.

Racial disparities exist in both registration and voting

Disaggregating registration and voting data by race reveals some interesting patterns as well. In 2016, Black and White non-Hispanic Minnesotans reported registering to vote and casting ballots at about the same rate. However, American Indian and Asian Minnesotans both registered to vote and then cast ballots at lower rates than White and Black Minnesotans. Among Hispanic/Latino Minnesotans, registered voters voted at a similar rate to their White and Black counterparts in 2016. However, reported voter registration was dramatically lower, at 58% compared to 88% statewide, leading to low voter participation overall. 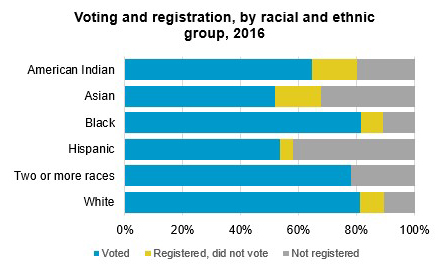 Lack of interest in, and dislike of, politics top reasons for not voting

Among Minnesotans who were not registered to vote in 2016, lack of interest in the election was the top answer given (49%) in the U.S. Census Bureau survey.

Among registered voters, the top reason given for not voting was dislike of the candidates and campaign issues (29%), followed by being too busy (14%), feeling their vote would not make a difference (13%), and illness (13%).

Although few voters in the past have listed difficulty registering or getting to the polls as their main reasons for not voting, there are concerns that those barriers may become more salient this year. COVID-19 is making it difficult to hold the kinds of large events where many new voters are registered, like graduations, new citizen ceremonies, and local festivals. Get-out-the-vote activities like door knocking are also more challenging in a time of social distancing.

However, the 2020 primary turnout shows that enthusiasm for voting remains high in Minnesota, even with the additional obstacles the pandemic presents. We hope you’ll check back with Minnesota Compass after the November election when we check in again on Minnesota’s civic engagement in this unprecedented election.