Generation Next aims to close opportunity and achievement gaps for students of color in Minneapolis and St. Paul. Minnesota Compass compiled benchmarking and contextual measures for the project. The data show some of the largest racial gaps in the state all along the continuum from kindergarten readiness to post-secondary completion.

Compass Project Director Craig Helmstetter sat down with Generation Next Executive Director R.T. Rybak to take a look at three factors that add to the complexity of closing racial gaps, and discuss the implications for Generation Next.

CRAIG: The large gaps in achievement scores by race are intertwined with even larger gaps by income. For example, in the greater Minneapolis-St. Paul region, 70 percent of white 3rd graders meet state reading standards, compared with 38 percent of 3rd graders of color – a 32 percentage point gap. The gap between higher- and lower- income students is even larger at 38 percentage points.

A recent national report raised alarm bells by stating that over half of public school students are lower income. The proportion is actually much higher in Minneapolis and Saint Paul. 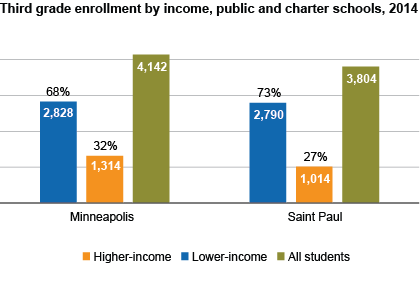 Students of color disproportionally land in that lower income category. In Saint Paul Public Schools, for example, 88 percent of 3rd graders of color qualify for free or reduced priced lunch, compared with only 27 percent of their white classmates. Given those realities, many might suggest that we are fighting impossible odds to close gaps.

R.T.: Generation Next believes every child can learn but poverty makes it more difficult. Concentration of children in poverty makes it more difficult still. Too often schools are left to solve these difficulties by themselves. The raw fact is our community has significant over-concentrations of poverty and we are often asking children to solve problems created by adults. This means we must engage in deconcentrating poverty in the name of helping children get a more level playing field.

CRAIG: Language presents yet another barrier. Sticking with 3rd grade reading proficiency as an example, we see a gap of more than 30 percentage points between students with limited English proficiency and their peers in both Minneapolis and Saint Paul. Both cities have substantial numbers of English learners: 34 percent of Minneapolis 3rd graders and 41 percent of 3rd graders in St. Paul.

Further, the diversity of languages spoken in our central cities is staggering! In Minneapolis the list includes 66 non-English languages, and in St. Paul the list grows to 119. Beyond educating students who are learning English, involving their parents must be a challenge, especially given the tremendous language diversity. 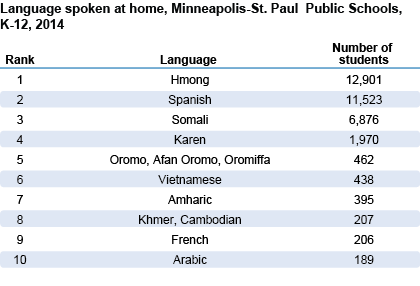 R.T.: Language presents our schools with some of their greatest challenges, and their greatest opportunities. The challenges are clear, including teaching students who have not mastered English and engaging parents who don't speak the same language as their child's teacher. This is hard enough in most American cities where the majority of English language learners speak the same non-English language. It is dramatically more complex here in Minneapolis-St. Paul where student bodies speak over 100 languages. Even if every teacher was bilingual, they would still only be fully reaching a fraction of those who are learning English.

There is also a tremendous opportunity to grow a workforce that has significantly more language capacity than we have today. The students of Minneapolis who speak many languages today can be the workforce that leads us into a stronger position in a global economy. Doing that means we have to send a stronger message to English-language learners that there is a significant advantage to also keeping their core language.

The students in Minneapolis and St. Paul schools are getting a global education where every student spends every day with children who are different from them, may speak another language, and who have a background in another culture. These are exceptionally important skills in the new economy, and we need to hold this up as a unique, critical asset of the same schools where there is the most need.

CRAIG: Professor and author Ann Masten, among others, has demonstrated a strong link between housing stability and educational success. The data we’ve assembled for Generation Next reinforce their findings: A much higher proportion of students who stay in one school meet state standards than students who are switching schools. In the 7-county Minneapolis-St. Paul region, for example, there is a 39 percentage point gap between the proportions of 8th graders who meet state math standards, depending on whether or not they switched schools during the year. This reinforces the importance of what Wilder Research Executive Director Paul Mattessich has called the “social determinants” of education, or factors that extend beyond the walls of the school building. 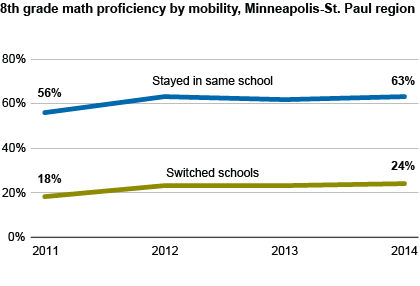 R.T.: Schools are critically important to a child's success, but Generation Next's work does not stop there. One of the reasons we have engaged more than 500 different organizations in our work is we are trying to align the many efforts in this community beyond the school's walls that impact a child's development. Speaking specifically to the issue of housing, our partners in the Saint Paul Promise Neighborhood and Northside Achievement Zone have both adopted housing stabilization as a core part of their comprehensive strategies to ensure school success. That is exactly the sort of thing that Generation Next can help to highlight and bring to a broader scale to have an impact on more kids.

Tackling the Gap with Generation Next

Ignite learning for all kids through afterschool activities

How CTEP is supporting the next generation of STEM stars