Paul provides oversight for the Compass project. He has led Wilder Research since 1982, building a research team dedicated to increasing the effectiveness of organizations and policies aimed at improving lives and strengthening communities. 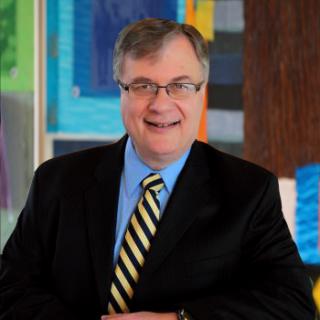 The Atlantic joined a long list of media which, throughout the past few decades, have heralded Minnesota’s high quality of life. Indeed, on many measures related to health, educational attainment, community safety, voter participation, and other features of life, Minnesotans can take pride in standing among the best of the 50 states.

However, a careful, more detailed look at the data reveals what’s called the “Minnesota Paradox.” That is, despite the high quality of life for our population overall, specific groups of residents in our state fare poorly on social and economic measures, and the disparities among racial groups stand among the worst in the nation. Thus, the article precipitated a serious debate, both nationally and locally.

Compass figured prominently in the debate as a source of objective information to shed light on the quality of life not just for Minnesota’s total population, but also for groups within the population including age groups, racial groups, and different neighborhoods.

Here are a few facts that Compass uncovers:

While the Twin Cities region ranks #1 among the largest 25 metro areas for proportion of adults working, the gap between the proportion of white workers compared with that of workers of color puts our region near the bottom. 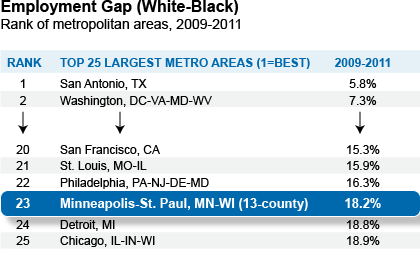 Overall, among the largest 25 metros, the Twin Cities region comes in #6 for percentage of adults with an advanced degree, but, a look at how the region is doing by race shows large disparities. 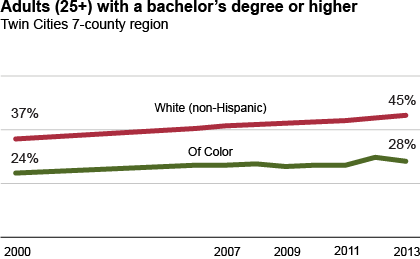 The causes of this paradox defy easy explanation.

Why does this happen in Minnesota? We probably understand some of the reasons, but definitely not all. Compass commits itself to working with others to address the root causes of disparities and support the advancement of our state to number one on all measures for all of our residents.

Other articles sparked by Atlantic's The Miracle of Minneapolis article:

Hodges responds to The Atlantic's 'Miracle of Minneapolis' piece, MPR

Maybe the 'Miracle of Minneapolis' should be called the 'Snub of St. Paul', MinnPost

The Atlantic Fawns Over the Twin Cities in Article Titled "The Miracle of Minneapolis," City Pages

Question the Premise blog, About that "Miracle"