With national elections just around the corner, the Compass Steering Committee recommended we revisit our Civic Engagement topic on Compass.

We brought together a group of experts from a variety of backgrounds to advise us on what key measures can best gauge the level of civic engagement in Minnesota and to identify resources to encourage active participation from all Minnesotans.

As always, agreeing on just a few measures to represent a broad topic area is challenging. But after a lively discussion, the group defined three important aspects of civic engagement to consider: People's connection to government, connection to community through organizations, and connections to each other. With that guidance, and reviewing our criteria for key measures, we finalized these three measures:

Our advisors also suggested resources that we have added to the More Measures, Ideas at Work, and Library sections of Civic Engagement.

What have we learned so far?

We are home to an engaged, participatory, and generous population. Among the states, Minnesota ranks in the top ten on all three key measures.

With about 1 in 3 of Minnesota’s residents volunteering, we come in at #4 in the nation. Higher than average rates are found among women, middle-aged and older adults, and rural residents. Over half of Minnesota’s volunteers log most of their time with religious or educational/youth organizations. The most common activity is collecting, preparing, and/or distributing food.

Minnesota ranked 5th in voter turnout in the 2014 mid-term elections. We were even stronger in recent presidential elections -- ranking #1 in 2004, 2008, and 2012 – when more than 70 percent of the voting-age population showed up at the polls. During the most recent midterm election, we saw above-average voter turnout among our oldest residents, non-Hispanic whites, and among voters in the Northland region.

When our advisory group encouraged us to broaden the definition of civic engagement to include less formal helping behaviors, we weren't sure what we would find. Now, having analyzed the data, we are happy to report that this is yet another way that Minnesota excels, ranking in the top 10 nationally. Nearly 3 in 4 adults in Minnesota helped neighbors in the past year. This includes things such as watching each other’s kids, running errands or helping with shopping, housesitting, lending garden or house tools, and other activities that connect people to the social fabric of their community.

2. But we’re slipping on some measures of civic engagement.

Fewer Minnesotans are volunteering. And those who volunteer, on average, contribute less time. 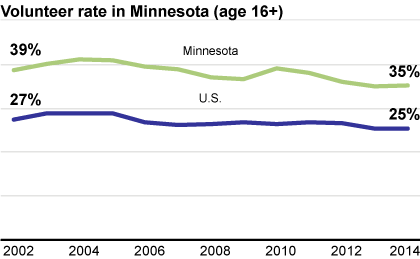 Paid employment may have supplanted some of this volunteer activity. We’ve seen an increasing proportion of adults working since 2010, as the economy continues to recover from the Great Recession. But a thriving economy and paid employment need not replace volunteer retention and engagement.

Voter turnout is another measure that shows some signs of decline. While our state has maintained a first place ranking for voter turnout during recent presidential elections, midterm election turnout has been slipping. Turnout dropped 13 percentage points between the 2002 and 2014 midterm elections. 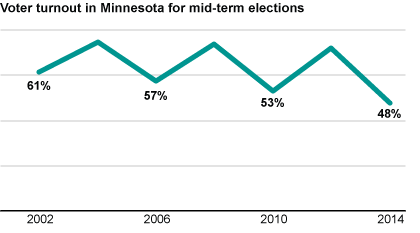 It is possible that 2002 turnout was influenced by the sudden death of Senator Paul Wellstone one week before the election, but we’ve still seen a steady downward march of voter turnout during every midterm election since then.

3. And we may not be fostering a climate of inclusion for everyone.

Each Compass topic has a goal. In Civic Engagement that goal is that “our state will foster a climate of inclusion that encourages active participation from everyone living in our community.” Trends in our new data raise warning flags about whether we are making improvements on this goal. 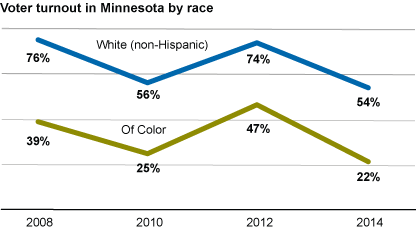 We also see racial gaps in Volunteerism and in our new measure Neighbors Helping Neighbors.

In addition to racial disparities, civic engagement differs significantly by age (or generation).

For example, just 45% of millennials, born in 1982 or later, are helping their neighbors. The same percentage of millennials – 45% – own a home. Both are probably linked to young adulthood, lower earnings, a lesser attachment to place, and a lower likelihood of having kids (and power tools to lend?). And, in fact, new reports in our Civic Engagement library suggest that millennial engagement may take different forms – through social media, for example.

4. We can build on Compass data to promote engagement among all Minnesotans.

Three of our Civic Engagement advisory group members spoke at our Minnesota Compass Annual Meeting about how their organizations build on the data to support active participation and civic engagement. Abdullah Kiatamba (African Immigrant Services), Bo Thao-Urabe (Coalition of Asian American Leaders), and Sina Black (Minnesota Voice) thoughtfully reflected on the need to see individuals behind the numbers, to capture more detailed data about specific populations, and to move from research to meaningful action. On this final point, our refreshed Ideas at Work section links users to more initiatives and collaborations working to increase civic engagement among all groups in Minnesota.

Instilling the value of civic engagement in youth

Are people less involved in their communities?