Immigration in Minnesota: a changing story

Immigration has greatly influenced the economic and cultural development of our state. Facts about the backgrounds, circumstances, and experiences of Minnesota’s immigrants have changed considerably over time, and differ from the nation as a whole.

Minnesota is home to over 400,000 immigrants from around the world.

Immigrants make up about 8 percent of Minnesota’s population, a smaller but more diverse group than in the past and compared to the U.S. as a whole. Until the 1970s, most immigrants coming to Minnesota hailed from western Europe, primarily Germany, Norway, and Sweden. Today, our largest immigrant groups are from Mexico, India, Laos, Somalia, and Vietnam.

Minnesota has a much larger proportion of Asian and African immigrants than the nation. For example, 22 percent of our foreign-born residents are from Africa, compared to 5 percent nationally. While over half of all immigrants nationwide are from Latin America, only about a quarter of Minnesota’s immigrants come from that region. 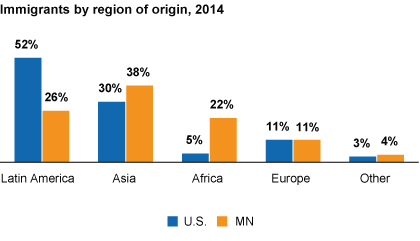 Our state has long been a welcoming community for refugees, which has shaped our uniquely diverse immigrant population. Since 2000, more than 41,000 refugees have arrived in Minnesota as their first destination in the United States. And our state is the top state for refugees who relocate from another state, usually within three months of arrival to the U.S.

Our newly updated group-at-a-glance profiles for Minnesota’s 11 largest immigrant groups demonstrate diversity in a variety of ways. Some of our largest immigrant groups have a longer-standing presence in Minnesota than others. The majority of Minnesota’s Chinese, Ethiopian, and Indian immigrants have lived in the U.S. ten years or less, while the majority of Minnesota’s Hmong, Korean, and Laotian immigrants have lived in the U.S. longer than 20 years. Our profiles also show great diversity in education, income, and language skills. 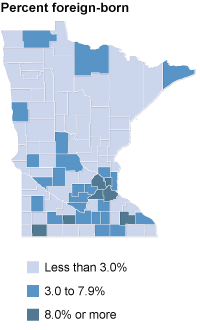 Most immigrants live in the Twin Cities, but there are pockets of immigrant communities in greater Minnesota

Among the 20 percent of immigrants who live in greater Minnesota, most are concentrated in areas where they have found employment opportunities. For example, the county with the greatest share of its population coming from abroad is Nobles County in Southern Minnesota, which first attracted immigrants to move there for meat processing jobs. Now, immigrants have become part of the fabric of the community, working in a variety of fields.

Overall, employment rates for immigrants mirror the state, but poverty rates are higher 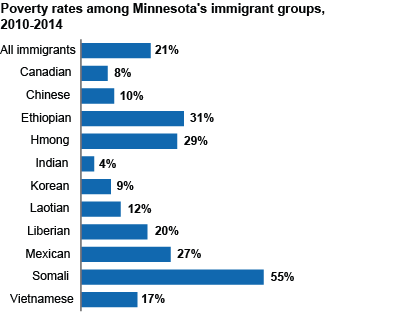 Children of immigrants are a growing share of our population and, as a result, of our emerging workforce

These trends suggest that children of immigrants are a growing segment of our emerging workforce. The ability to speak a foreign language can be a strength in our increasingly global economy, and 15 percent of students enrolled in Minnesota’s public schools speak a language other than English at home. Two-thirds of these students speak Spanish, Somali, or Hmong. But here again, we see considerable diversity, with 249 different languages identified during the 2015-2016 school year. 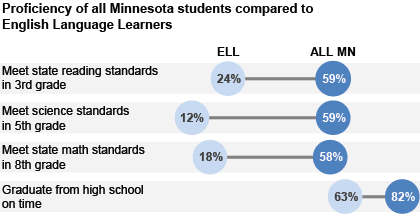 Looking ahead, continued economic vitality in our state will depend on an emerging workforce with diverse skills and preparation. This requires intentional thought and concerted effort around the inherent strengths and emergent challenges experienced by our immigrant communities.

Underscoring these strengths, challenges, and diversity across groups, new results from Speaking for Ourselves: A Study with Immigrant and Refugee Communities in the Twin Cities are now in the Compass library. Ongoing work on this study has provided up-to-date information on the experiences of unique immigrant and refugee groups who live here.